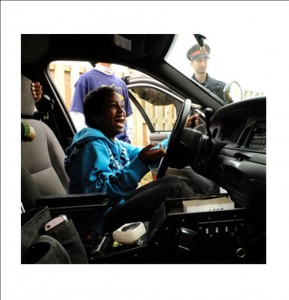 December 15, 2011-Nadar Azabi used to think police were scary. The 11-year-old student at Islamic School of Hamilton said he remembers seeing his mom pulled over. He thought the cop was mean. But after going though the RCMP junior police academy, Azabi said he realizes police are “normal people, who have an important job to do.” The daylong event at the school inside the Hamilton Mosque Wednesday was the first of its kind in Ontario. Similar programs run in British Columbia. Roughly 50 students from Hamilton and Niagara were split into four groups and run through a fitness test, drills, forensics and drugs classes. They also got a look at a police dog and horses in action. The kids peppered the police with questions about everything from how they catch bad guys to the weight of their equipment.

“There are many misconceptions about the faith of Islam and Muslims in the community, not (unlike) the police,” said RCMP community outreach Sergeant Derek McDonald, adding that both bear negative stereotypes. The RCMP was part of a different outreach program that came to the school last year. So when the opportunity came to start a junior police academy, McDonald said, they went for it with the aim of building on their already established relationship.Some of the children’s families are from countries where there is good reason not to trust the police, he said, adding that the RCMP hopes the junior academy can help break down those barriers in Canada. “It’s a good opportunity for the Muslim community to bridge the gap between the community and police,” echoed school principal Yousef Kfaween.

Azabi said he was especially impressed by the drugs classes, which had a constable who works at Pearson International Airport explaining why drugs are wrong and how police find the drugs and catch the dealers.

Ola Elsharif, 10, said her favourite class of the day was forensics, where officers used special equipment to copy a shoe imprint off a tabletop.

Like Nadar, she said she used to think police were mean, but has changed her mind.

“It was so exciting, and so cool that we’re the first school in Ontario,” she added.

It is hoped the day helped strengthen a Canadian-Muslim identity for the youths, said Kamran Bhatti, a spokesperson for the Muslim Association of Hamilton and board member for the North American Spiritual Revival, an event sponsor.

“An event like this, they’ll never forget,” he added.

This article is for personal use only courtesy of TheSpec.com – a division of Metroland Media Group Ltd.